You are here Home > 60 Years of Royal Show

This year celebrates 60 Years of the Royal Three Counties Show

1958-1968 The first show was held at the permanent site of the Three Counties Showground at the foot of the Malvern Hills in 1958. The show was honoured by an attendance by Her Majesty Queen Elizabeth, the Queen Mother.  A five-year schedule of works was undertaken including the laying of permanent trackways, installation of water, electricity and other utilities and the building of a permanent office block and council room.

2018 Sixty years on, the site has grown to encompass 298 acres including a range of permanent buildings, a woodland and a lake.

1968 – 1978 In 1968 the show welcomed Her Majesty the Queen. She spent four hours at the show, spending time viewing the livestock and casting a knowledgeable eye over the Corgi class.

1978 – 1988 In 1986 the largest permanent building on the site, Severn Hall, was opened by HRH The Princess Royal.  At that point the show had grown to employ 12 permanent staff and become a business in its own right.  A further six seasonal staff were employed for six months of the year along with 320 during show time.

1988 – 1998 In 1997 the show celebrated its bicentenary with HRH The Princess Royal in attendence. It was Worcestershire’s year to host the celebration and to mark the occasion Mayors from 30 different towns and cities, where the show had been held over the last 200 years, were paraded as guests of honour.

2018 This year celebrates 60 years of the show being held at the showground. Worcestershire is back in the spotlight as the host county again and a special tea party for invited guests and dignitaries will celebrate the show’s rich history.

1998 – 2008 In 2001, the Royal Three Counties Show was cancelled, for the first time since World War Two, due to the devastating foot and mouth crisis. The Malvern Hills were also closed during this time and the Cheltenham Gold Cup was cancelled too.

2018 One of the most pressing challenges in 2018 for livestock farmers is the threat of bovine tuberculosis.  Working with the regulations the livestock entries remain strong across all sections demonstrating the popularity and prestige of the show.

2008 – 2018 The show was awarded Royal status in 2014 under the patronage of HRH The Princess Royal.  It establishes itself as one of the largest livestock and equine events in the UK and celebrates the great British countryside and rural life.

Don’t miss out on a visit to this splendid country show and pop in and say hello to the team at Eat Sleep Live Herefordshire who will be headlining the Herefordshire Hub. We will have Eastnor Pottery demonstrating with their potters wheel Friday and Creative Breaks will be demonstrating sponge painting to make beautiful bunting on Saturday and Sunday – come along and have a go and take away your free copy of the Ultimate Herefordshire Guide 2018. 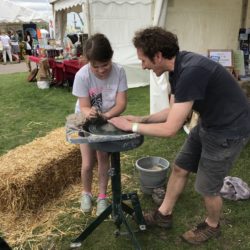 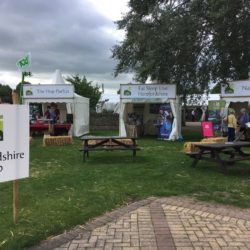 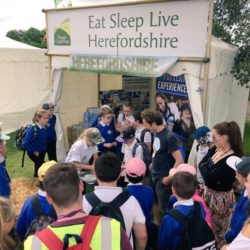