When the county of Herefordshire was chosen to host the first conference of the recently formed Ciderlands, the International Network of Cider Culture & Tourism Destinations, this autumn, we knew it would be an amazing occasion.

What is Ciderlands?
As interest in cider continues to grow throughout the world, ‘Ciderlands’ is a network of cider-producing countries and regions all seeking to promote travel and cultural exchanges between the classic and emerging cider lands, as well as to act as a cider tourism beacon for the world as a whole.

Ciderlands was forged in November 2017, during the Sagardo Forum Cider Congress. Then it was officially founded in September 2018, during the International Cider Culture and Tourism Meet-up held in the Basque Country in Spain.

Coordinated by committed cider fanatics Ciderologist Gabe Cook and drinks writer Susanna Forbes, Team ESL was delighted to part of the working group that hosted the world-wide visitors, alongside Hereford Museum of Cider and The Big Apple.

Beginning with a wonderful country pub supper at The Crown Inn Woolhope on the Thursday evening, landlord and cider enthusiast Matt Slocombe talked each amazing course through with its Herefordshire cider pairing. 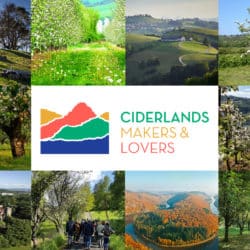 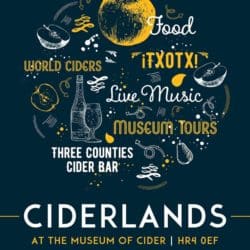 Ciderlands at The Museum of Cider 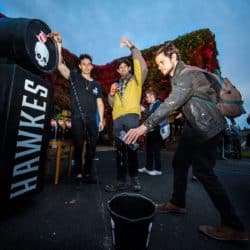 Cider pouring at the Friday night event (by Natalie Jolley)

Cider Showcase
On the Friday, the formal Ciderlands conference was held in the morning, followed by time at iconic producers Westons at Much Marcle. Then it was on to a special public celebration of cider at the Hereford Cider Museum, which also allowed the Ciderlands delegates to showcase their own products.

An opening address was made by High Sheriff James Harvey Bathurst, and the evening continued with a party atmosphere including music and street food and, of course, plenty of cider.

Wassail! To Ross and beyond
Continuing their Herefordshire experience on the Saturday, the Ciderlands group visited Ross on Wye and award-winning producers Ross Cider and Perry for a talk, tour and tasting. Then it was back to their pub The Yew Tree for a hearty Ploughman’s lunch before moving on to Hellens Manor. 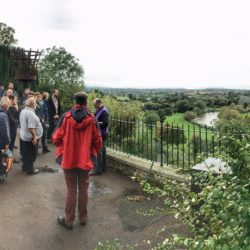 View from The Prospect in Ross on Wye town (by ESL) 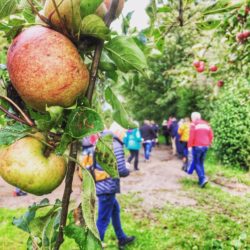 Tour of cider orchards (by ESL) 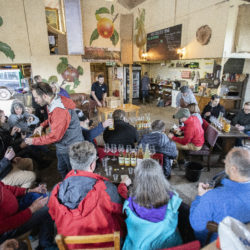 While not a traditional cider-making venue, Hellens was one of the 9 wonderful locations taking part in The Big Apple weekend, which this year celebrated its 30th year. The group watched and even took part in traditional apple-pressing, not forgetting too the pressing of Perry Pears from which Hellens makes its own small annual batch of Perry. The Leominster Morris men put on a vibrant performance of traditional dance and music, and the delegates were able to learn about the UK’s tradition of Wassailing in January. 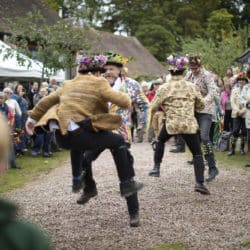 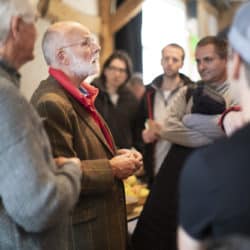 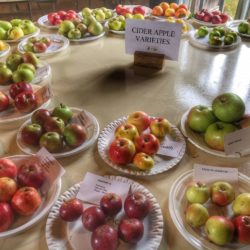 Cider apples at The Big Apple (by ESL) 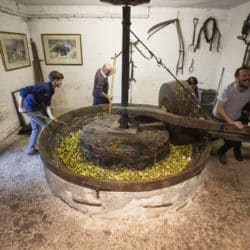 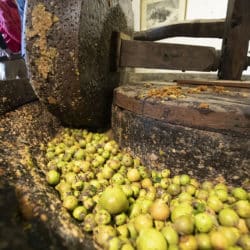 Perry Pears on the mill stone (by Bill Bradshaw) 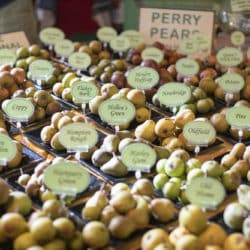 Perry Pears at the Big Apple (by Bill Bradshaw)

A delicious end
Saturday evening saw the culmination of the visit with a spectacular banquet at The Green Dragon Hotel, which had been the delegate’s home throughout their stay. The newly refurbished hotel decked its ballroom tables with beautiful themes of harvest, candles and a unique celebratory 4 course menu. Again each course was paired perfectly with local ciders and a dessert perry, and the 90 diners were treated to dishes such as local cured trout, blade of Hereford beef and Herefordshire cheeses. 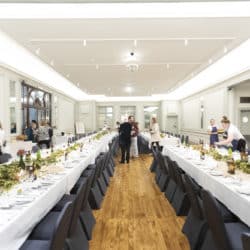 The Ballroom at The Green Dragon Hotel (by Bill Bradshaw) 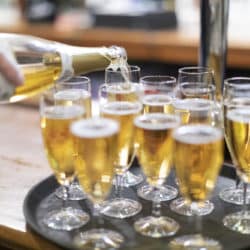 welcome drinks (perry) at the Ciderlands Banquet (by Bill Bradshaw) 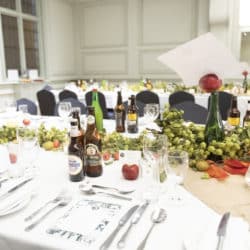 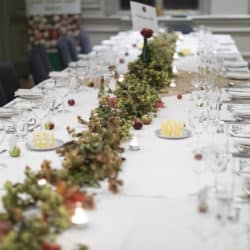 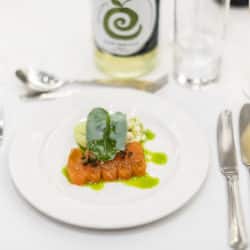 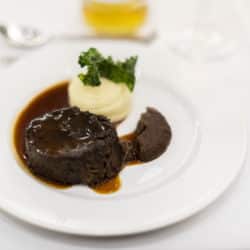 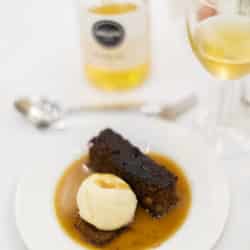 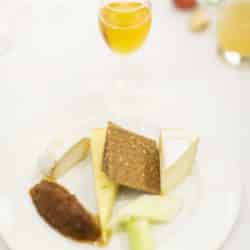 Herefordshire cheese board (by Bill Bradshaw) 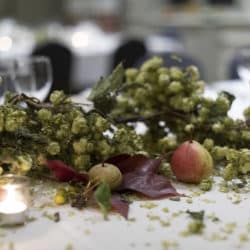 “The whole visit has exceeded our expectations” said Ciderlands Secretait Haritz Rodriguez. This comment was matched by tremendously positive feedback and a social media frenzy from the other delegates during and beyond their visit. 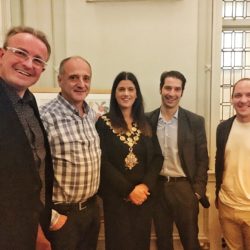 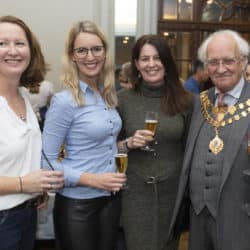 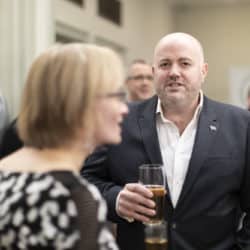 After greeting the international contingent in nine different languages, Green Dragon Hotel director Christian Dangerfield said “We have been absolutely honoured to host an occasion of this kind. It is a first for Ciderlands and a first, hopefully of many more, for The Green Dragon Hotel”. 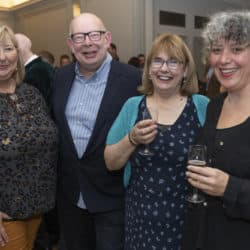 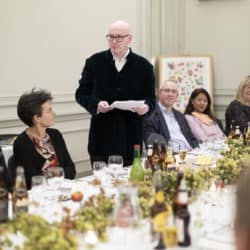 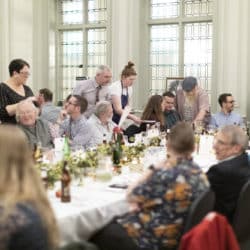 Guests at the banquet

Eat Sleep Live’s own MD, Heidi Chamberlain-Jones said “It has been wonderful to showcase Herefordshire on an international platform like this. Tourism is hugely important to all of these nations and to have identified Herefordshire as a capital that they want to trade with, with a heritage product such as our amazing cider, is incredible and we look forward to building on those relationships.”

ESL would like to congratulate Gabe Cook and Susanna Forbes for bringing this event to Herefordshire and for all their planning and coordination, alongside the Cider Museum.

We’d also like to give special acknowledgement to sponsors National Association of Cider Makers, The Green Dragon Hotel, Westons, Three Counties Cider & Perry Association, Bulmers | Heineken, The Pippin Trust, Museum of Cider, Hereford without whom this would not have been possible.

Thanks too to Bill Bradshaw for fab photos

Look out for more on where we go next with our new Ciderlands friends to develop our fruity tourism relationships and in the meantime Wassail!