Designed by the Royal Academy sculptor, John Maine, the magnificent sculpture and stained glass window will be a modern focus for reflection, pilgrimage and worship in the 1,300 year-old Cathedral, which houses the world-famous Mappa Mundi and Chained Library.

Ascension has been two years in the making, with the nine metre-high installation comprising 3,000 pieces of European glass in 40 different colours. The parallax glazing, which creates breathtaking movement and depth to the window, was assembled by the architectural glass specialists, Derix, in their studios near Wiesbaden, Germany. It took the three specialists from Derix just four days to install the glass at the cathedral. 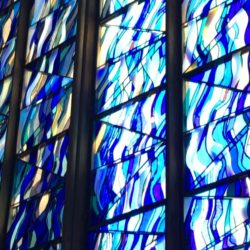 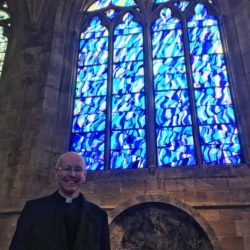 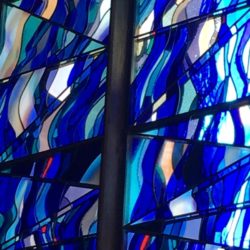 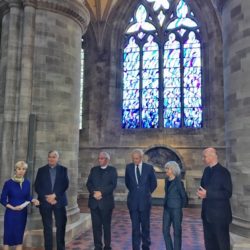 Three of the stones forming the monument are from Scotland. The base or pediment is dolomite, from near Stirling and the large sandstone recumbent comes from Clashach, near Elgin.  The inscription Special Air Service is hand-cut in a block of Caithness slate by the distinguished letter cutter, Nicholas Sloan, who lives in Somerset.

The ledger stones at the foot of the monument are black marble, from a mine near Mons in Belgium. The SAS badge is the work of Perthshire carver, Gillian Forbes. She has also cut the line of poetry Always a little further – from the poem The Golden Road to Samarkand by James Elroy Flecker and used by the SAS since the 1960s – in this very hard Belgian material.

The beautiful blue apse is carved from a kind of granite known as syenite. The block originated in Brazil but John Maine carved the work in China, assisted by a team of masons and polishers and was transported to the UK by sea, via the Suez Canal, Gibraltar, Rotterdam and Grangemouth. The final journey for all the stones has been by road from the Fyfe Glenrock stone yard near Aberdeen.

The public opening of the spectacular installation comes after seven months of preparation work inside the cathedral, managed and supervised by Treasure & Son, the 274 year-old specialist building contractors based in Ludlow, Shropshire.

The Dean of Hereford, the Very Reverend Michael Tavinor, said: ‘Ascension is as breathtaking and spectacular as John promised it would be. It is a marvellous addition to the beautiful artwork in this historic cathedral and I know it will draw visitors from all over the world, who will – like us – look on in wonder at this extraordinary symbol of the link between Hereford and the SAS.’

The artist, John Maine said: ‘Ascension has been a creative challenge for me, combining glass and stone on a huge scale.  It has opened up a whole new world of possibilities.

‘The process has been stimulating from the outset; first responding to the architecture while strengthening the connection between the cathedral and the SAS. Now the installation brings the diverse parts of the work together as a whole.  I am delighted to see the glass in its final setting, framed by magnificent tracery with the sky beyond.

‘The colours are animated by all manner of light conditions and the window also projects colour within the cathedral.  I trust that the monumental stonework at eye level will become a place for reflection and renewal, leading upwards through the expanse of the window.’

Colonel Rupert Prichard, President of the SAS Regimental Association, said: ‘Ascension is a stunning piece of art, here for us all to ponder and appreciate and in a place that is very, very special to the SAS. This is the living memorial that we wanted – timeless, uncluttered and totally captivating. We will each see and think what we want, when we want, how we want. The analogy to a continental wayside shrine is very apt. It is nicely understated in its excellence but wonderfully powerful in its meaning – and with a good dash of mystery. The Regiment in its art form perhaps?’

As the public see Ascension for the first time, the cathedral will celebrate with a day of bulbs and broderers. After the first hourly prayers of the day, including the SAS Regimental Collect at 11am,  local embroiderers will exhibit their work, there will be children’s activities and free highlight tours of the cathedral while the gardening team will give guided tours of the spring planting in the cloisters. The artist, John Maine will also be in the cathedral with The Story behind Ascension. The day will conclude with Choral Evensong. A formal dedication will be held later in the year.

Members of the public can still be a part of Ascension by making donations via the SAS Regimental Association or Hereford Cathedral. Details of how to donate are at www.sasmemorial.co.uk and www.herefordcathedral.org/SASmemorial