Initial analysis from the Knife Angel Hereford team shows that at least 102,000 people visited the statue during its recent visit to the city.

In addition, more than 700 school children took part in associated workshops to learn about and discuss issues related to violent crime. A further 30 free to attend events were organised for the general public, including sessions about coping with stress after lockdown and bereavement workshops.  The Herefordshire Walking Festival even included a visit to the Knife Angel along two of its routes! 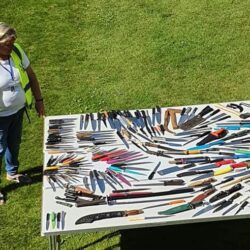 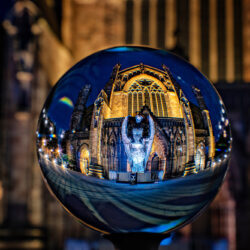 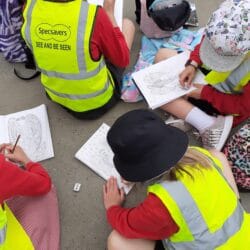 During its four week stay, the Knife Angel became a focal point for visitors to the city. Nearly 200 volunteers were recruited to provide advice and information. These included Samaritans and Vennture team members who were available to offer additional support for those who needed it.

Thousands of photographs were taken of the Angel, including stunning shots from the official photographer, Jon Simpson.

The Knife Angel was free to visit, but nearly £11,000 was donated on site by members of the public. Thanks to their generosity and to grant awards from West Mercia Police and Crime Commissioner, West Mercia Police, The National Lottery Community Fund, High Sheriffs of Herefordshire (2020/1 & 2021/2), Eveson CharitableTrust, Community Safety Partnership and the Clocktower Foundation, the Knife Angel team has gathered a legacy fund of more than £30,000 to continue with its work to raise awareness of the devastating impact of violent crime.

The Knife Angel’s visit to Hereford was organised over 18 months by a core team, led by Alison Davies and Meryl Cain. Alison, who lost her own son to knife crime in 2018, says:

“We are thrilled by Hereford’s response to the Knife Angel and would like to thank everyone who supported us, volunteered, or visited the statue.

Many visitors were visibly moved and deeply affected by this stunning work. It certainly helped to stimulate debate and discussion around the subject of violent crime of all sorts and how we can prevent it. That can only be a good thing, and we are now planning how we can continue the debate into the future.”

More than 350 knives and two guns were surrendered to the two Knife Angel amnesty boxes (one located at the Knife Angel site at Hereford Cathedral, the other at Hinton Community Centre). These will now be melted down to produce a commemorative sculpture for the city.

The Knife Angel left Hereford in the early hours of 12 July. It is currently at its home base in The British Ironworks in Oswestry, awaiting its next public appearance in Chelmsford, Essex in the September.

For further information about the Knife Angel’s visit to Hereford, please visit the dedicated website: https://knifeangelhereford.co.uk/.

The National Monument Against Violence & Aggression – The Knife Angel

The Knife Angel is a stunning 27ft tall, 3.5-ton sculpture of an angel made out of 100,000 confiscated knives received from 43 Police Forces across the UK. Originating from The British Ironwork Centre in Oswestry https://www.britishironworkcentre.co.uk/show-areas/the-knife-angel-official and created by sculptor Alfie Bradley,  it took two years to construct.

Prior to lockdown, the Angel toured around the UK and has become a national monument against violence and aggression in all its forms.

We are very grateful for the support of the following organisations: